Read the full interview from PW below:

For many, the topic of finance conjures a wealth of emotional response, some of them not so warm and fuzzy. Dr. Anthony M. Criniti IV (aka “Dr. Finance™”) is a self-proclaimed “financialist,” which is a term he coined in his 2013 book to distinguish the financial scientist from the “economist,” the economic scientist—he aims to change attitudes about finance by empowering readers to confront their own financial profiles. And Dr. Criniti says it’s not just about seizing opportunities and smart money management; instead, he believes it’s a matter of life and death.

Dr. Criniti, whose professional path has taken him from “poor to rich and back again,” brings decades of expertise to his three-book library of finance-focused titles. He worked in the financial planning industry for about 10 years before the economic crash of 2008 made that career path less viable. Having always been invested in education, he became a professor instead, teaching courses on finance, including business and management, to generations of students who, like him, had had little in the way of financial education in the context of traditional schooling.

He wrote his first book, The Necessity of Finance, in 2013 and geared it primarily to a student audience. The book was so well-received that he followed it with The Most Important Lessons in Economics and Finance, aimed at educating the general public. That book presents “218 principles about learning how to manage money and finance.” Those principles, which are clearly and approachably presented to readers, include practical tips such as, “It is important to always inspect your bill before you pay” as well as the more philosophical, “You can’t run away from yourself.” His third book, The Survival of the Richest: An Analysis of the Relationship between the Sciences of Biology, Economics, Finance, and Survivalism (2016), takes a deep dive into the science of finance and economics.

Through Dr. Criniti’s years of navigating his own financial circumstances and assisting others in managing their finances, he’s learned a few indisputable truths: 1. People don’t always understand what finance is. 2. People often don’t like to talk about finance. 3. People need to talk about finance.

Part of the resistance to discussing finance, Dr. Criniti says, comes down to a failure, even on the part of adult educators, to grasp the essentials. “How can they teach kids when they don’t understand it themselves?” he says. “Finance is not understood, and that’s my mission in the first book. To get back to the roots. What is it that we are talking about?” Ultimately, Dr. Criniti believes that the root of the conversation about finance comes down to a one clear reality. Finance isn’t purely the domain of financial planners or the very wealthy; the need to make and manage money is everyone’s concern. “It’s about struggle and survival,” he says. For those who care about surviving, finance is “the most important subject.”

Dr. Criniti draws a clear distinction between “finance” and “economics.” The latter concerns “nations and its divisions at the macro level,” whereas finance concerns “individuals, groups, and organizations, including businesses.” Individuals don’t have the power to literally “print money,” he says. Instead, their personal empowerment—indeed, their very survival—arises through the handling of their own unique financial circumstances. And the task of learning about finance doesn’t have to feel elusive, boring, or insurmountable.

From Dr. Criniti’s perspective, the discomfort individuals feel when broaching the topic of finance lies deeper than concerns over a missed credit card payment or falling short of a financial aspiration. “When people talk about finance, it makes them a little unhappy,” he says. “People don’t like to discuss difficult, deep-rooted subjects. Finances are tied to the root of everything we’re doing. They have to do with life and death.” As he writes in The Necessity of Finance, “in our modern civilization, to struggle financially means to struggle in every aspect of life.” And that makes finance not only essential but also plenty exciting.

Dr. Criniti wants to teach, write, and talk about money matters, he says, “in a way that gives full respect and understanding to the subject,” thereby recontextualizing a subject that is so often met with anxiety and resistance. For those facing financial hardship during the Covid-19 crisis, Dr. Criniti acknowledges the challenges and urges them to strive, through greater understanding, for future security. “Don’t be afraid to look deep into your budget and come up with a financial plan, because figuring out what the problem is is half the solution,” he says. “Everyone needs to learn finance whether they’re rich or poor. Everyone can find a better way to manage their money.” 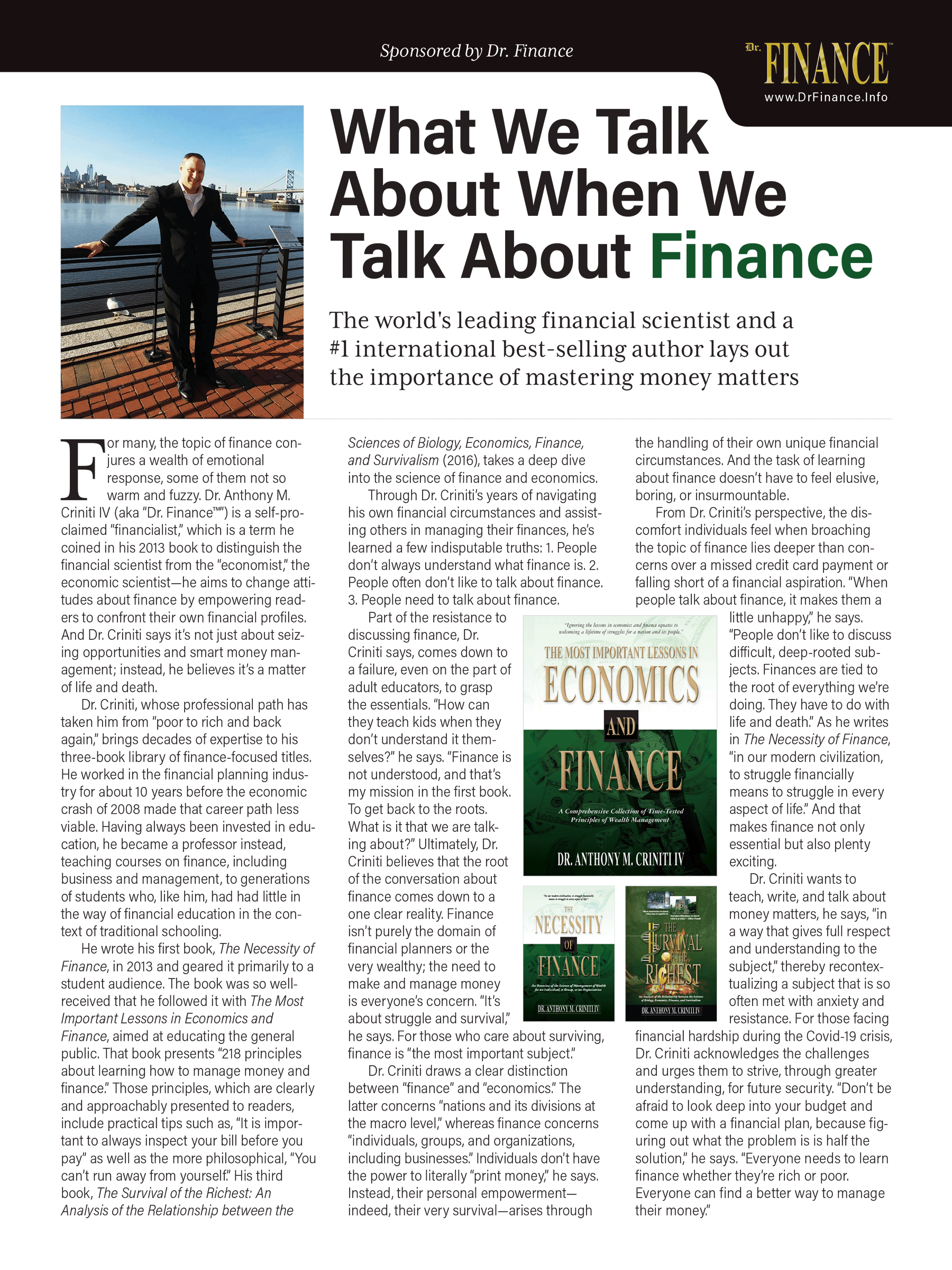